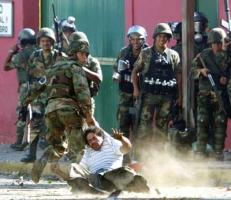 What little gains the ordinary people have made in getting back a fraction of the wealth they create has been paid for in sweat, blood and tears. The enemy of the working class, the corporate world, backed up by the state, will go to any lengths to hold onto the plunder they have squeezed from the sweat of the workers. Murder is never off the agenda, they know how to play hardball, and the have the power of the state behind them.

This month marks the annivesary of one such murder, less than 100 years ago. The following is taken fromBleedmeister Dave’s Daily Bleed.

During a prolonged conflict between miners & copper companies, a vigilante group drags Industrial Workers of the World organizer Frank Little — broken leg and all — from his boarding house and hang him from a railroad trestle. As a warning to others, the lynchers pin the old vigilante numbers, 3-7-77, to his clothes. Authorities make no attempt to find the assailants.
Years later the writer Dashiell Hammett would recall his days in Butte as an armed mercenary being paid by the Pinkerton detective agency & the mine companies. One night, as he sat in a Butte bar, Hammett said he was approached by a mine company representative who offered him $5,000 to kill Frank Little. Beating Wobblies with clubs was one thing . . . murder was another, & Hammett said he quit on the spot.