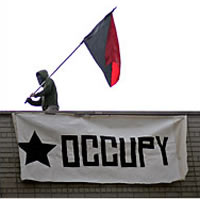 Tuesday sees well manicured millionaire Osborne, on behalf of the millionaires club, launch his attack on the working class via his emergency budget. This will be the first step to take the working class back to the thirties, back to Victorian poverty. We have to show that we are not going down that road just to save the bond markets and some of his other millionaire friends from suffering some financial loss. They want to safe guard their fortunes at our expense, they know it is a class war, we pay for the problems, not the millionaires that caused the problems. To them, that’s the way it should be. We have to show that we also recognise this as a class war and we know who our enemies are. We are not in the same club as that bunch of pampered, parasitical, millionaire hypocrites.

On Tuesday 22 June there will be a demonstration and rally in George Square Glasgow from 3pm onwards. There will be a host of speakers speaking out against the cuts but no doubt some will be asking for you to vote them into power next time round. That’s not the answer, the rally and demonstration is all well and good as a first phase to show our opposition to this savage attack on our living standards and show that we will act in solidarity with all our communities. However the struggle must continue into the workplaces and the local communities. Standing in George Square listening to speakers will not stop the cuts.

It was on July 31st 1925 that then Prime Minister, Stanley Baldwin made the following statement; “All the workers of this country have got to take reductions in wages to help to put industry on its feet.” Yes, they seem to have been a wee bit more honest in those days, no crap about us all being in this together for the sake of the country. Less than a year on from that statement Britain was in the grip of a general strike. The entire working class was solid but were sold down the river by the trade unions. We must learn from that and never let control leave the grass roots. All action against the cuts must be driven and controlled by the people involved, don’t play follow-my-leader into the trap of change the party in power and waving at a new smiling shiny leader.

Workers control, communities controlled by those in that community working in federation with each other to change society, not to change the leader. We don’t need leaders, prime ministers, kings or presidents, their record doesn’t stand up to scrutiny.