If the workers’ needs are to be fully met we must get rid of the bosses. No easy matter considering the bosses are well organised both on a world wide and a national basis from the IMF, the World Bank, the G8 etc. At the national level there is the state and with the state comes the force of the military, the police, the judicial system set up to punish those who would dare to try to break the mould.

We live in a world where the 225 richest people have a combined wealth of the world’s 2.5 billion poorest people. The state is there to protect the interests of this minority, it will be done by persuasion, if this fails then force will be used without limit or compassion.

Persuasion starts in education (state propaganda). History is not neutral, what we learn in school is the necessity of government, our own government’s benevolence as opposed to others. The greatness and wonderful moral uprightness of our leaders, (deemed to be necessary) and the wonderful benefits of capitalism. The worlds poverty is never linked to the capitalist system.

What we do not learn is that many times, it has been shown that government is not necessary, People are not inherently bad. Given the right conditions a spirit of mutual aid and co-operation can and does grow. 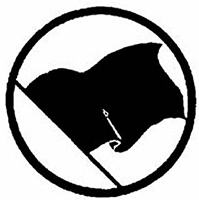