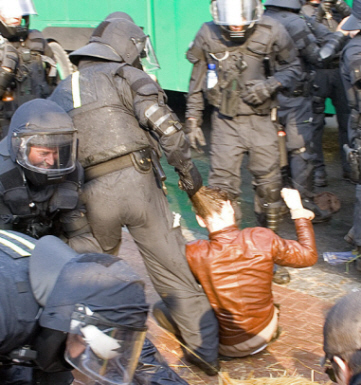 December 2008 in Athens a youth is shot dead by Greek police, this brutal act was the catalyst for the release of a wave of pent up anger and frustration of the Greek people, a wave that washed over Greece and many European cities for well over a month. April 2009 an innocent man walking home from his work in London is brutally assaulted and dies, again it is the hand of the police that is blood stained. Anybody who has been to demonstrations on a regular basis knows that the police are not there to keep the peace nor to enforce the law, their action is always provocative and intimidating. They are agents of the system and are there to stifle protest. The history of protest is written in the blood of ordinary people, blood shed by the various agents of the system. Each death causes shock among the ordinary people but our history is littered with such events. Who remembers Blair Peach? April 1979, he was clubbed on the head at a demonstration in London and died the next day, no charges were ever brought against the police officer responsible. Death by misadventure was the verdict.

It is time that the ordinary people woke up to the fact that the state kills workers who fight for a better life. Here in Glasgow we can go back as far as you want and the story is the same. 1787 Calton weavers strike, the strikers marched towards the Cathedral to make their point in a demand for a living wage, the military opened fire and killed 6 wounding many more. Jump forward to 1919 when workers were asking for a 40 hour week to try to soak up unemployment. They were baton charged in George Square and running battles ensued throughout the city the military with fixed bayonets were posted on the city streets, machine guns on the roofs at George Square and tanks stationed off the Saltmarket. Remember the brutal treatment hand out to the miners in the eighties? Our history is littered with such cases, struggle to improve your life and risk the wrath of the state, it’s there to protect the wealth of that army of parasites that feed off our backs. Until we build a mass grassroots movement to replace the system of profit and exploitation, and to protect us from the ravishes of such a system we will continue to suffer at their hands.